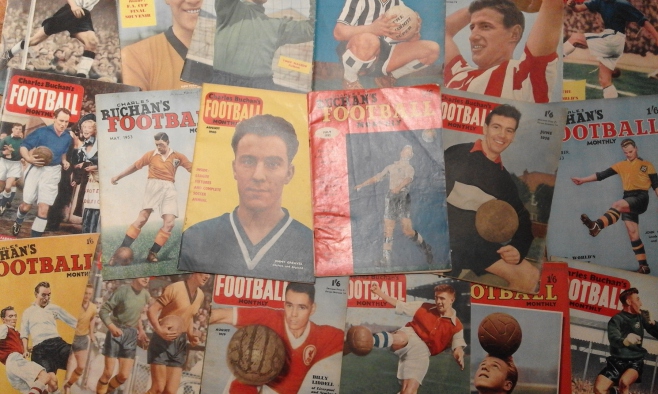 The original football magazine first appeared in September 1951. The Charles Buchan name was dropped on the twentieth anniversary in 1971.  An ill-fated decision to switch to a pocket format - Football Digest - followed in September 1973. Sales figues plummeted, and along with the restrictions in non essential publishing in the early part of 1974 which led to sister weekly magazine 'Goal' only appearing fortnightly, this was enough to put the magazine out of business, the final issue appearing in June of that year.

Generally regarded as the daddy of modern football magazines, we can offer many early issues from the early 1950's onwards. In this section you will find details of magazines from the initial issue through to the end of 1960.  Initially the only colour in the magazine was on the front cover, but colour "painted" pics began to gradually appear and increase throughout the early years.  Colour centre spreads began in November 1957 (details of the colour content within each magazine is listed against each issue)

UNLESS STATED, MAGAZINES IN THIS SECTION ARE PRICED AS FOLLOWS :