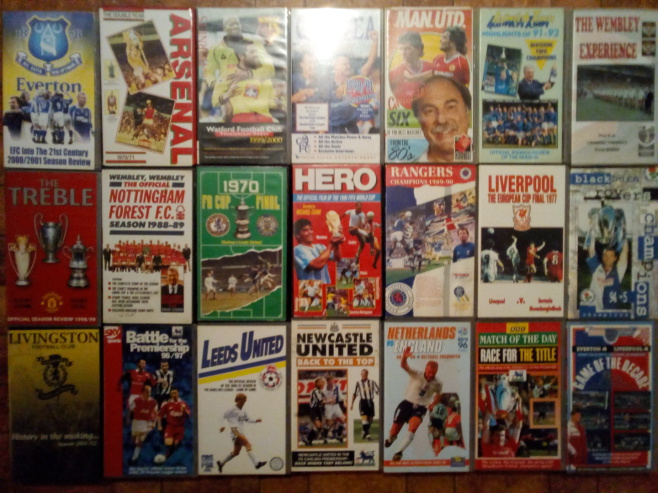 Contrary to popular belief, there WAS football before 1992.....

The divisions were numbered correctly, players only had 1 to 11 on their backs (or 12 & 14 if they were substitutes), goalies wore green tops and the same colour shorts and socks as the rest of their team-mates, and the only people allowed to wear black were the referees and linesmen !!!  Much better, wasn't it ?

Just as there was something before the Premier League, there was another way to watch recorded football prior to DVD's taking over, namely the good old fashioned video cassette. If you preferred your football in the not-so-long-ago days of pre saturation coverage, and still have the equipment to play it on, then this section is for you !

We have a selection of quality checked football videos from the mid 1980's through to the early 2000's for you to choose from, and much of this material will NEVER be available in any other format. These include a number of excellent pre-Premier League Official Club Histories produced and issued by the BBC in the late 1980's, tapes from the Official Football League Video series from 1988-89 onwards, plus plenty of other club produced titles, end of season reviews etc.

Video tapes are priced at just £3 each.  However, we know that we've all got used to a different level of viewing via DVD's these days, while video cassettes are not of the same quality, and of course deteriorate over time.  Please be aware that we do NOT accept returns on video tapes, and do not accept responsibility to any damage to customer's equipment resulting from tapes purchased from NWM.  We WILL make a full viewing/inspection of the quality of any tapes which may interest you before confirming they are fit for sale.

And whisper it gently....there are PLENTY of little independent shops who have the facility to transfer these onto DVD's for you !!!

(  * against a listing indicates that the tape is still sealed and in unused condition ).

POSTAGE RATES  -  UK, please add £4 for 1-3 tapes. Four tapes would be charged at a 'lot price' of £15 including postage, and as usual, and UK orders of £15 or more will qualify for FREE POSTAGE  (in which case, you may as well buy five tapes instead of four !!!)