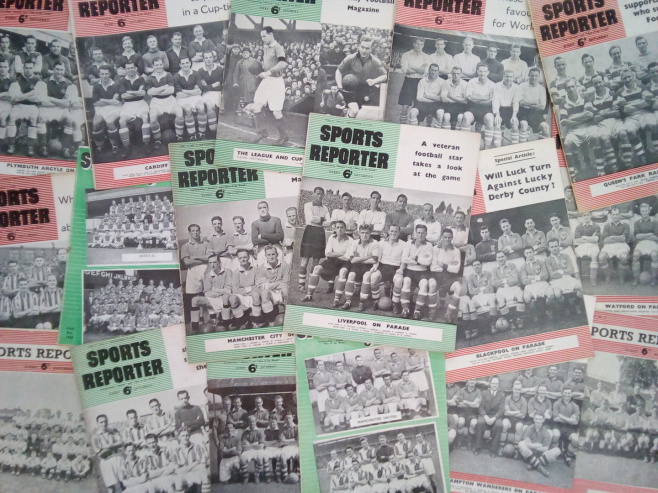 Sports Reporter was first published as a pocket sized magazine in August 1948. It quickly grew into a larger format, and was soon subtitled 'Incorporating "Airman" and "Man Of The World" ', though it's content was 90% football related. Initally the magazine carried two photos (either team groups or action shots) on both the front and back covers, though when the magazine switched to an A4 format in 1949, a larger photograph filled the front cover, the back being given over to article space, by which time it had also become a purely football journal.

The publication "down-sized" at the start of the 1950-51 football season, and the end of the magazine followed shortly after, becoming part of 'Speedway' magazine (running with the strap-line, 'Incorporating Football Up-to-Date & Speedway Pictorial) in October 1950.  However, a marker had been set down for the football magazines which began to emerge during the following decade, in particular the format used in Sports Reporter is somewhat reflected in Soccer Star when that launched in September 1952.

We are now pleased to be able to offer a selection of copies of this early modern-day football magazine, with the majority in excellent condition for the age (a few have had rusty staples removed, while there are slight tears to a couple), with the cover photos, front and back for issues up to the middle of 1949, front cover only thereafter listed in the usual format.

UNLESS STATED, ALL ISSUES OF SPORTS REPORTER ARE PRICED AT £5 EACH