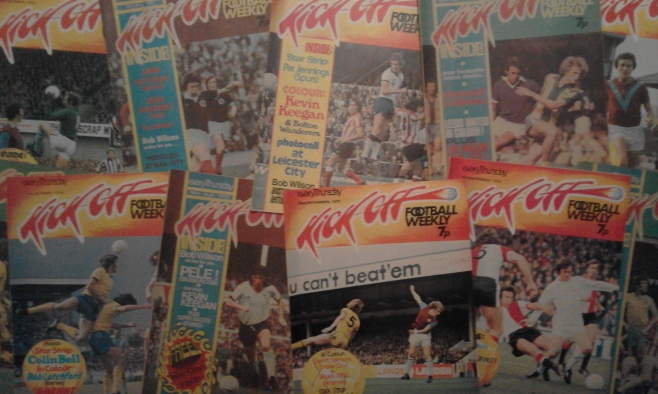 Clearly aimed at the very youngest of football followers, Kick Off Football Weekly was a part comic/part magazine hybrid which launched at the start of the 1975-76 season.

While there where occassional features on clubs or players, the only real 'name' who contributed to the publication was Bob Wilson. The magazine benefitted from colour front (action shot) and back covers and a centre pull-out, details of which are listed below, but the majority of space was given over to comic strips, though there was normally a couple of full page black & white player photos included too.

The publication went a little more glossy in October 1975, but (like Top Soccer four years later) the format didn't really work, and the sixteenth issue dated November 29th was the final one.  We have recently been able to secure a batch of these scarce comics to add to our selection of Classic Magazines.

UNLESS STATED, ALL KICK OFF FOOTBALL WEEKLY COMICS ARE PRICED AT £3 EACH